Huestacean is a Philips Hue screen syncing app for Desktop and Android devices. It uses Philips’ new Entertainment API to sync the user’s screen with their lights with very low latency. 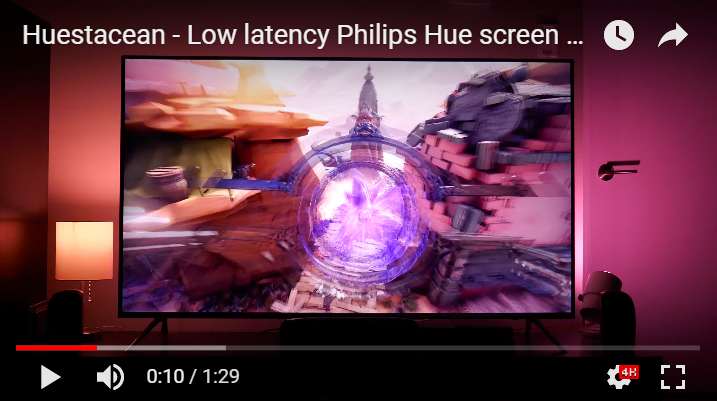 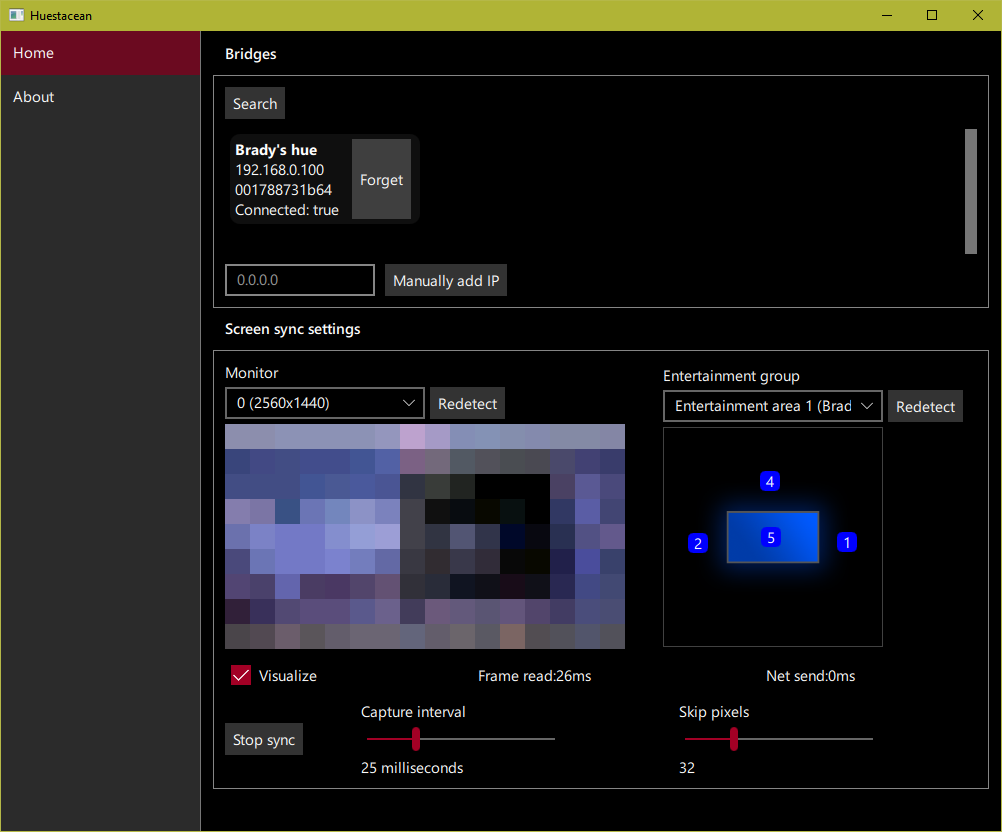 Downloadable binaries for Windows, macOS, and Android are available on the Releases page. It ought to also be possible to build the source for Linux but this has not yet been tested, please read the README for instructions on building from source.

This software can cause rapid flickering of your Hue lights that may trigger photosensitive epileptic seizures in vulnerable individuals. DO NOT use this if you are or suspect you are affected by photosensitive epilepsy, or are otherwise photosensitive, epileptic, or suffer from seizures generally. Cease use immediately and consult a doctor if you suffer from any seizure symptoms, which may include lightheadedness, altered vision, eye or face twitching, jerking or shaking of arms or legs, disorientation, confusion, or momentary loss of awareness.

A Gen2 bridge is a must. Your bridge and lights should also be using the latest firmware. Use the Philips Hue Android or iOS app to update the firmware.

At the moment this software can’t create entertainment groups. You need to do this in the Hue app. Philips has a video describing how to do this on the Hue Youtube channel.

The Lightstrip Plus is by far the best light I’ve found for this. It has a wide color gamut, and it dims to a super dark state before it turns off completely. My Gen 1 lights are still pretty bright at their dimmest. This can be a problem when syncing the lights in a darkened room.

For the best experience, I’d suggest using or more lights behind or to the side of the display, in front of you and within the central cone of vision. Rapid changes in lights behind or to your side are likely to be more distracting and annoying than they are actually enjoyable. The video above is more lights than I actually use this with; usually I only have the one lightstrip behind my TV syncing.

Only (64-bit) Windows 8 and 10 are fully supported as the application uses the IDXGIOutputDuplication API which is only available from Windows 8 onwards. This allows the application to capture almost anything, including fullscreen games, with extremely high performance. If someone else is interested in working on Windows 7 support I’d welcome PRs, though.

If you have a Hybrid GPU setup (some laptops, convertibles, etc.), make sure you run Huestacean on the Integrated GPU, not the Discrete GPU.

Only supported on macOS 10.7+ (uses AVCaptureScreenInput). Performance may be worse than Windows and Android.

Build from source. See the README for more information. Performance may be worse than other platforms.

This is still experimental, and is known to crash. Side-load the APK and run it. It does not currently run as a service so Android will kill it to save resources if it thinks it needs to. Requires Android 5.0 (uses MediaProjection)

Use the repository’s Issues to report bugs or other problems.

This project is using:

Refer to the LICENSE file for license info.

This software makes use of open source software under various licenses, which may be found in the third_party_licenses directory.

This software uses Qt 5, which is licensed under the GNU Lesser General Public License v3.0. The text of the license can be found in third_party_licenses/lgpl-3.txt. The corresponding source code for Qt can be found on their website, or at https://s3.us-east-2.amazonaws.com/bbrenot-thirdparty-sourcecode/qt-everywhere-src-5.10.0.tar.xz ; the end user can provide their own Qt5 and modifications by replacing the distributed Qt shared library files (Qt* .dll, .so, .dylib, etc.)